HOW I ENDED UP IN THAILAND

My career started in the hospitality business in Bournemouth in the United Kingdom working in hotels beginning in the early 1980’s.  Previously I had spent about 5 years in menial jobs and I had even spent a  year as a nightclub DJ.  Most of my hotel career was spent working for an international hotel Management Company who managed hotels all over the world, my role was primarily in food and beverage Management.  After spending approximately 4 to 5 years working in the Middle East in countries such as Bahrain, Dubai, Abu Dhabi and India to name just a few, I was reassigned to the companies Far East office which was based in Bangkok.  However, my first postings in the Far East were unfortunately not in Thailand.  I spent a long time working in Singapore, South Korea, the Philippines, Indonesia and China.

I first stepped foot onto Thai soil  in 1991/1992, I did not know it then, “But it was to be the start of an ongoing love affair with the Kingdom that has lasted almost three decades!”  Initially I was sent to Khon Khen to be part of the Management team who where to open a brand new hotel.  I worked in Khon Kean for two years and enjoyed my time in Isaan immensely.  Way back then Khon Khen was still a bit of a back-water not the large city that it is today.  After my 2 year stint had come to an end I was reassigned to a hotel In Yogyakarta, Indonesia (No, that’s not a spelling mistake that really is the name of the town.)  Indonesia did not do it for me, Thailand was much more fun and I wanted to get back to Bangkok as soon as possible.

It was now 1995 and I had made up my mind that I was going back to Thailand whatever it took to get back into the country.  I had an English friend who was married to a Thai lady and he was living in Bangkok full time.  My friend had a small business but was very much interested in getting into something else with me as a partner as we where (and still are today) “Close friends.”  I had some savings and knew that if I was to be successful in remaining in Thailand I would need to have a business to generate income to live.  My friend and myself opened a small café/bakery in Siam square, Soi 2 which had moderate success but it was clear that neither of us where going to get rich from our cafe.

About this time the Internet was just starting to explode!  It was way before the “.com bubble burst”   and plenty of opportunities where available to budding entrepreneurs like my friend and me.  We setup an IT business in Bangkok and made some money online as well.  Sadly the opportunities that where available in the 1990’s on line have all but vaporized and have mostly been swallowed up by very large companies.  As they say, “It was good while it lasted” and we made a lot of money, so much so that even today, “I am managing to sustain my income from investments made” from our business way back then.

Returning to the UK:  I decided to relocate back to the UK around 2001 believe it or not; I had simply had more than my fill of the Far East and Thailand.  You get to a point when you just want to eat fish fingers, drink a proper cup of tea and understand everything that you hear on radio, TV and on the street.  It only took about a year before I started to get itchy feet and spent many, many days on my computer looking up all things Thailand.  At this point in my life I had purchased my own house and I was well and truly settled in the UK.  It would be very difficult to simply uproot and move back out to Thailand full time.

Rediscovering Thailand:  Around 2003 I decided that I just had to head back over to Thailand to see how I felt when I arrived back in the Kingdom.  I bought a ticket with Thai airlines, packed a large bag and headed over to Bangkok for about a month.  Needless to say, I had an extremely good time and enjoyed many things in Thailand that you simply cannot find in the UK.  Upon arriving back home in the UK, I had a very difficult decision to make!  Do I stay in the UK or do I head back to Thailand?  I like many things about the UK; it’s very safe, clean, free medical and a contract means something it is not just a piece of worthless paper which is often the case in Thailand.  However, I also missed many aspects of being an expat in Thailand.  So I decided I would split my time between the UK and at that time, “Pattaya.”  I rented a very small but comfortable apartment which was also cheap in Soi 1/Ally off the beach road and quite close to the “Crown Pattaya Beach Hotel.”  I was spending about 5 months of the year in Pattaya and the rest of my time in the UK.  They say “You can have too much of a good thing” and that is exactly what happened to me…I simply got bored of Pattaya.  I gave up my apartment which I had rented for around 3 years and moved back to Bangkok!

I rented a very nice, cozy room in the Omni Tower, Sukhumvit Soi 4 which was great as I was in the heart of the action as they say but did not have to sit around in Taxis and Tuk Tuk’s wasting time getting to the night life (unless I fancied going out to Soi Cowboy or PatPong) and by now the BTS (Sky Train) was operating which was not the case when I first arrived in Thailand in 1991.  I had rented my room for about 5 years and split my time between the UK and Bangkok but again, started to get very bored.  It was now 2011 or 2012 and once again I decided it was time to head back to the UK full time (for now.)  After about a year (again) living in the UK I was missing Bangkok and Thailand.  Again, I think it was purely for the fact that some things in Thailand are obtainable that are unobtainable in the UK.  What should I do?  I really did not want to move back out to Thailand full time not even to spend half my time as I was now a lot older and less energetic than I was way back in 1991 when I was just 31; in 2012 I was 52.

Present day: Since 2014 I have “again” been a frequent visitor to Thailand.  I no longer rent apartments opting instead to stay in small hotels that will give me a decent discount .  I tend to visit Thailand 3 to 4 time a year spending up to a month in the country which suits me just fine.  I am approaching 60, I still have my health but all the constant traveling is now very tiring and to be honest, I now dread the two days traveling to and from Thailand…I just love the bit in-between.  So long gone is the Thailand I first encountered nearly 30 years ago when I got 80 Baht to the pound, a beer in a GoGo bar was 25 Baht and Thailand was genuinely “The Land Of Smiles!”

YouTube:  I am not a natural born YouTuber!  I am actually quite a shy person.  It all started with a couple I know who live close to me had planned a trip to Bangkok.  They both knew that I had spent a lot of time in Thailand and asked me if I could meet up with them and give them some tips that would help make their trip more enjoyable.  I duly obliged and told them all the dos and don’ts!  Don’t touch Thai people on the head, don’t show the soles of your feet, don’t make anyone lose face, etc, etc…Upon returning from Thailand the couple told me that “They had a extremely enjoyable vacation/ holiday” and suggested that I made a YouTube video to offer advice to others.  Initially, I was very hesitant as I just did not think people would be interested in what I had to say and although I get trolls sending me negative messages, I tend to ignore those idiots and concentrate on all the positive and supportive people who write nice messages to me and encourage me to put out more content.

The Future: I mentioned in a recent video that I had given a lot of thought as to how I wanted the direction of my channel to go in the future as I now spend so much of my time in the UK it can be difficult to constantly come up with new and interesting content; although saying that, “I am planning to continue visiting Thailand.”  I would very much like to build a community and perhaps at a later stage, also start a forum that subscribers can share their experiences about Thailand with others but that is all in the future…For now, “Sincerely thank you” to all of my subscribers and viewers and especially those who have provided me with excellent stories and content to share with others. 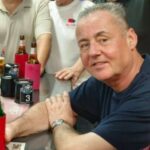 error: Not this time, find your own images, don’t try to steal mine!